The 7 Worst Exercises for Older Adults

Every human body ages at its own pace, leaving us with vastly different abilities and limitations. But some exercises are unsafe for almost everyone over 60. Here are the ones to avoid — and what to do instead. 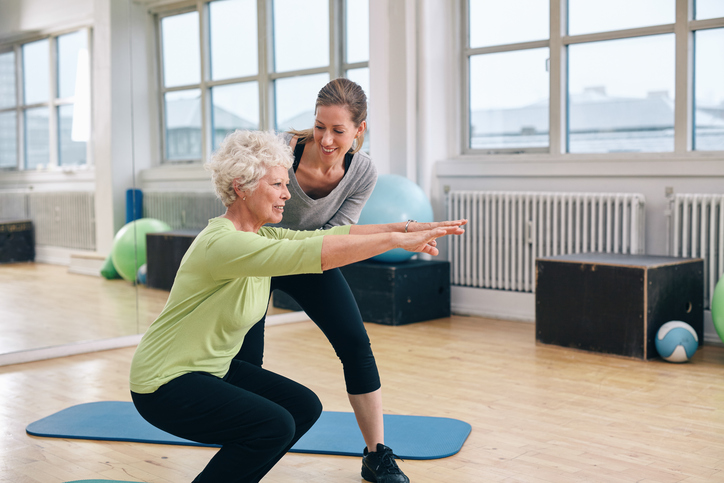 I see George around the gym all the time. We’re both lunchtime regulars and typically acknowledge each other with a customary nod. But I’d never started a conversation until the other day, when I noticed he was limping. I asked what happened.

That launched us into a long and winding conversation, which is how it goes with workout injuries. The older you get, the harder it is to describe any single problem in a straightforward way. Each new one is linked to an older one, and each older one has its own history.

George told me his limp was caused by back problems, which in turn were linked to a hip replacement. After that surgery, he saw a physical therapist whose program included an exercise called the leg press.

The first time he did leg presses, he felt uncomfortable. The second time, he felt shooting pains down both legs. Soon his sciatica was so severe he needed a series of pain-numbing epidural injections just to move around again. Months later, like I said, he was still limping.

I told him I was surprised his therapist had put leg presses into his program. Even more surprising: George’s therapist also had him doing crunches. Back-pain specialist Stuart McGill, Ph.D., warned about the dangers of both exercises in Low Back Disorders, a book he published in 2002. How could a rehab specialist not know this in 2017?

When I told this story to Alexandra Smith, a trainer in Los Angeles who works primarily with older clients, she said it happens a lot.

“I’ve had many clients whose doctors and therapists gave them things that are completely detrimental to their well-being,” she says.

It even happened to her: She saw seven different physical therapists for a shoulder injury, and only two of them helped her. Several gave her exercises that made the problem worse.

That brought us to an important question: Are there some exercises that older adults should never do — or at least use with extreme caution? It’s not an easy question to answer, but there are three types of exercises that present more risk than reward.

Exercises That Can Create New Problems

Leg press: Smith puts this at the top of the list for multiple reasons. To do the exercise, you straighten your legs by pushing with your feet against a weighted platform. Because your upper body is supported by a padded bench, you have the illusion that your lower back is protected.

But it’s not. Your lumbar spine has a naturally arched shape, and to avoid injury when lifting, you need to keep it in that position. In a leg press, your lower back often flattens when you bend your legs, and then shifts back into its natural arch as you straighten them. When a heavy weight is involved, this movement can damage your spinal discs.

Crunch: It presents the same problem as the leg press. You flatten your lower back against the floor as you raise your head and shoulders and feel the squeeze in your abdominal muscles, then go back into an arch when you lower yourself. Although you aren’t using much weight when you do it — just a fraction of your body’s weight — you typically do lots of repetitions.

Running: It seems like the most natural way to get into better shape. Bodies are designed to run, right? Yes, but only bodies that are young and relatively lean. For older and generally heavier bodies, the repeated impact of running can cause real damage when you begin late in life. You take more than 2,000 strides per mile, and with each one, you land with a force equivalent to three to four times your body’s weight.

Interestingly, this doesn’t apply to experienced runners, whose bodies have adapted to the impact. But if you’ve never run, age 65 isn’t the time to start.

Upright row: Smith sees one big problem with almost every client who’s middle-aged and beyond. They sit too much, usually hunched forward over a desk or electronic device. That gives them chronically tight muscles in their chest and upper back, and chronically weak neck and middle-back muscles.

The upright row, as its name suggests, involves pulling a weight vertically with those overly tight upper-back muscles, making them even tighter.

Chest press: This exercise, Smith says, can be equally problematic, since it involves repeatedly squeezing the chest muscles, which are already too tight in many of her clients. Seniors should avoid this exercise altogether using free weights. The chest press machine is safer, but always use light weight and move slowly and smoothly. When in doubt, ask a trainer or your doctor if the exercise is safe for you.

Exercises That Are Difficult to Do Correctly

Overhead press: If you can push two dumbbells straight above your shoulders without bending backward, you’re cleared to do this exercise. But Smith says she’s never had a client over 60 who could do it correctly.

Most, she says, lift the weights diagonally, so their arms travel forward, rather than being aligned with their torso and legs. That can make the exercise very tough on the shoulders, potentially straining the muscles and connective tissues that hold the joints together.

Deadlift: This exercise involves lifting a heavy weight (usually a barbell) straight off the floor. If you’re a healthy young athlete or strength enthusiast, the deadlift is not only effective, it’s probably one of your favorites. “It’s a great exercise,” Smith says, “but so few people do them correctly.”

The biggest problem: You begin with your body bent forward at the hips, and then straighten your hips as you pull the weight from the floor. It takes a lot of strength in your hip and torso muscles to keep your lower back in a safe position. If it shifts out of its natural arch at the beginning, and then moves back into it at the end, the risk of a disc injury is astronomical.

4 Exercises That You Should Do Instead

You can find any number of great exercises to do, in or out of the gym. The following four offer the most benefits with the least risk.

Walking: “This is one of the most important things for my clients, because they sit so much of the time,” Smith says. It gives you everything you want from an exercise:

Is walking on a treadmill just as good? Smith discourages it because a motorized treadmill does too much of the work for you. You need to elevate the walking surface a few degrees just to match the effort of walking on flat ground.

Mainly, though, using a treadmill takes away one of the biggest benefits of walking: Getting outside, where you can enjoy sunshine and fresh air. To get started, download our free 31-day walking plan.

Squats: Unless you spend a lot of time on steps or hills, walking isn’t going to do much to increase your lower-body strength, or to preserve the vital muscle tissue that disappears with age and inactivity. That’s where the squat comes in.

It’s a simple exercise — you push your hips back, as if you’re about to sit in a chair, and then straighten your hips and knees as you return to the standing position — with countless variations. If you belong to a gym, you’ve probably seen a bunch of them, starting with the impossibly strong young men who squat with hundreds of pounds on their backs.

Obviously, that’s not the right choice for you. (Or for anybody who isn’t young and injury-free.) The best way to start is by sitting back until your butt touches a box or bench that’s about 18 to 24 inches high. From there, you simply rise and repeat.

Just make sure you start the movement by pushing your hips backward, rather than bending your knees and shifting your weight out over your toes. Your feet should stay flat on the floor while your chest stays up, pointing forward.

If you need to make it harder, hold a dumbbell with both hands right under your chin.

Pushups: This exercise works the same muscles as the chest press, but it also stretches them while training the core muscles to stabilize your torso and protect your lower back.

Not many older people can do traditional pushups, with your hands and feet on the floor. Fortunately, you can make it easier without losing any benefits by elevating your hands on a box, bench, or step; a kitchen counter; or even a wall.

Rows and lat pulldowns: As with squats, there are lots of ways to do rows. But the one you’ll see most often in a gym is the seated row, using a cable machine. It’s usually part of an apparatus that includes a lat-pulldown station.

With both exercises, the movement is pretty simple: Use the muscles in your upper and middle back to pull a bar to your chest. Hold it in that position by squeezing your shoulder blades together, return to the starting position, and repeat.

As I said, these exercises are just a sample.

“People underestimate what older people can do,” Smith says. Sometimes the older people sell themselves short by sticking with the simplest exercises when there are so many better choices.

But keep in mind what George discovered the hard way: Just because an exercise is simple doesn’t mean it’s good for you.

Lou Schuler is an award-winning journalist and author and a certified strength and conditioning specialist. His latest book is The Natural Way to Beat Diabetes, which he wrote wit